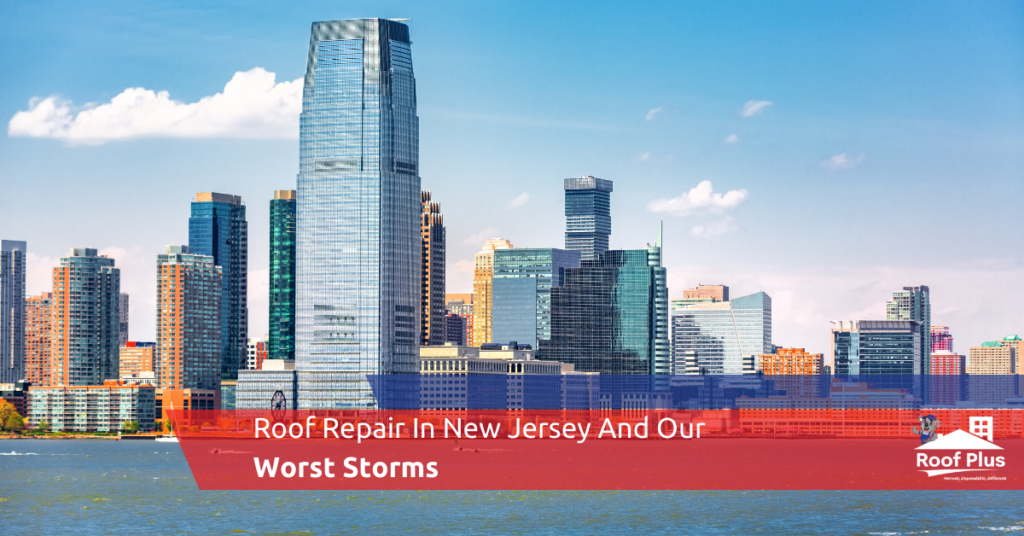 Roof Repair In New Jersey And Our Worst Storms

With multiple hurricanes affecting states like Texas and Florida currently, hurricanes are on the mind whether you live in the states being hit hard or not. Hurricanes Irma and Harvey have been devastating, not unlike some tropical storms that have made their way to the Jersey Shore in the past. We, as your local roofing company that handles everything from window repair, gutter repair, gutter cleaning, and siding services to full on roof replacement, have seen our fair share of storms and the pursuant damage hurricanes have caused.

Helping our community members get back on their feet with roof repair and other affordable roofing services is what we do best. But before we get carried away describing all of the advantages we have to offer our customers, let’s get today’s post. Read on if you are interested in learning about some of the most intense and terrible hurricanes and storms that have hit New Jersey.

In 1962, from March 6 until March 9, a huge northeaster bashed the coast of New Jersey for 4 consecutive days. Typically, hurricanes pass through after a day. But northeasters are distinct. They can hit hard and not go anywhere. Floods rose up within hours of the storm coming in. Streets caved in, houses washed away, and families fled in fear for their lives.

A rival to Hurricane Sandy herself, 25 foot waves crashed down upon the shore, with wind speeds over 80 mph. The storm has been reported to have cost around $130 million in damages, which would be close to $1 billion today, factoring in inflation. Remarkably, Long Beach Island became five islands and the Loveland Town Bridge was destroyed in Point Pleasant Boro. All in all, 40 people lost their lives in the storm, with plenty of others losing their homes, getting injured, and having to start over.

The Norfolk And Long Island Hurricane

Let’s rewind even further and go back to 1821. For context, this is essentially 50 years before Thomas Edison harnessed electricity to power a light bulb for the first time in 1879. Other inventions of this time period include the cotton gin, steam engines, cameras, and typewriters. That’s a while back! But back to the hurricane. The storm was one of the only Category 4 Hurricanes that has ever been recorded this far north. With winds reaching over 150 mph, albeit according to unconfirmed reports, it is difficult to imagine experiencing such a powerful hurricane in the modern era. At the time, there were only around 4,000 people living in Cape May. Up in NYC, however, significant flooding within the streets of Manhattan has been documented, along with people feeling the adverse affects of the storm all the way to Philadelphia.

Let’s stay with the century at hand, and talk about a storm of a different color. White would be that color, quite literally, as the storm dumped over 2 feet of snow on the shore, along with freezing winds. The cold that came with the storm was so severe that it snapped elevator and telephone lines. Tragically, around 200 people died as a direct result of the Great Blizzard, with the majority of those people being in NYC.

In 1944, a massive hurricane struck the Jersey Shore with little to no warning coming to the public. As it was a time of war, the U.S. maintained a radio silence about the weather forecast, so as to not give the enemy a tactical advantage. With winds close to 100 mph and waves reaching 25 feet high, the storm picked up vacation homes and placed them blocks away.

Interestingly enough, the government opted to use German POWs to help with cleanup duty. Although the hurricane of 1962 is more well-known, the Great Atlantic Hurricane was certainly substantial.

In 2012 is a superstorm that we experienced both professionally and personally, as was the case for pretty much every resident near the Jersey Shore and beyond. If Sandy had come about 50 years earlier, for instance, the loss of life might have been catastrophic. And although 72 people died in the United States from Sandy, a tragic sum, the results might have been substantially worse if the good people of New Jersey hadn’t taken heed of the host of warnings.

Nevertheless, the storm surge was about 8 feet in Northern New Jersey, according to the National Hurricane Center. Remarkably, the total damages from Sandy were just under $30 billion. Many communities are still rebuilding, and with that in mind, we would like the opportunity to describe a few of our services which might be of use to those still seeking to do so.

Luckily, we don’t get storms of the above magnitude every year. But we still get annual storms which can cause significant damage to homes up and down the shore. When you work with a roofing contractor like Roof Plus, you are working with a roofing company that has been a part of the New Jersey community for many years. Being ingrained within the community means we truly want the best for our customers, because we understand that building trust leads to customers turning into long-term clients. We set ourselves apart by providing you with affordable, realistic expectations and recommendations. For example, we will let you know if roof repair or roof replacement is your best avenue, along with our reasons for such a recommendation.

In addition to roofing services, we also provide gutter cleaning and gutter replacement options, along with siding services and window installation services. Whether your property in question is commercial or residential, we have a passion for bringing you affordable, excellent results. From job start to finish, we believe in efficient, hard work being done correctly the first time. Our service area includes Spring Lake, Point Pleasant, Brick, Wall Township, and beyond. If you are interested in a free consultation for roof repairs or whatever the case may be, give us a call today.